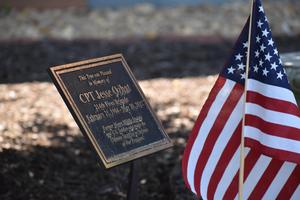 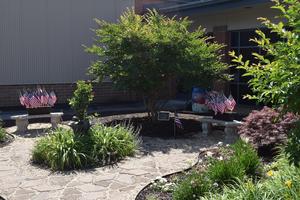 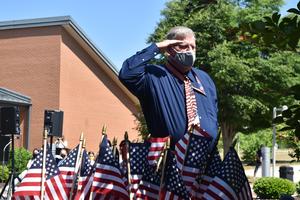 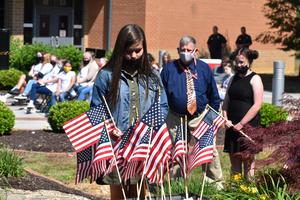 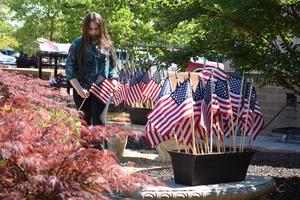 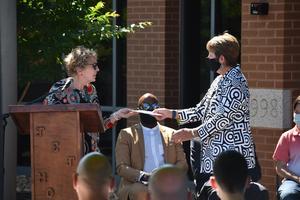 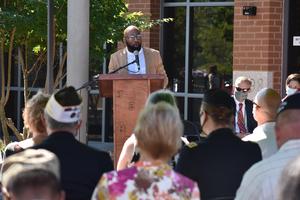 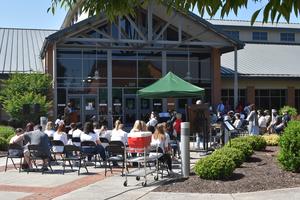 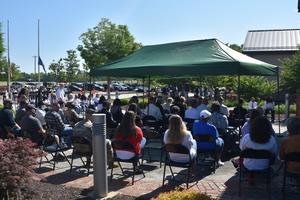 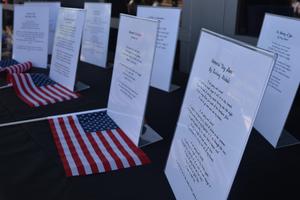 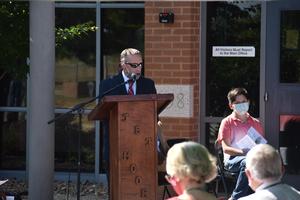 When Ozbat was slain in 2012, his brother Elijah was a 6th grader at J.E.J. Moore Middle. His mother, Cindy, who was a regular volunteer at the school's events, worked at L.L. Beazley Elementary School.
The loss of Ozbat traveled through the school's community, leading J.E.J. Moore Middle's teachers, particularly those who had previously taught Jesse, to want to do something to memorialize his service and sacrifice. Those efforts started with the planting of a tree in front of the school in Ozbat's honor. Shortly after, the J.E.J. Moore Middle School Parent-Teacher Organization agreed to fund a remembrance plaque to be installed in front of the tree. Both were in place outside the school near the building's front entrance before the summer of 2012. A tree and plaque were also presented to the Ozbat family from the J.E.J. Moore Middle School community.
That same year, it was decided that the tree and plaque would become a garden to honor Jesse's sacrifice and the sacrifice of all of Prince George's fallen service members. Since 2013, the school has held the Memorial Day Tribute to an assembly of students, teachers, community members, and active and retired military members at the memorial garden.
The event has become an annual collaboration between J.E.J. Moore's students, teachers, and administrators as they come together to work on different aspects of the ceremony, be it grounds preparation, musical numbers, the placing of American flags in the gardens, and other tasks. The school has also partnered with the Prince George Regional Heritage Center, which provided the names of the 48 soldiers who died in service to the nation from World War I to the present day. For this year's event, a poetry contest was held where students wrote pieces reflecting on the significance of Memorial Day and the service of the fallen. J.E.J. Moore student Joshua McPeak's poem titled "Upon Hallowed Ground" was the selected piece, which he read to a group of several dozen people assembled for the ceremony.

'Upon Hallowed Ground'
By: Joshua McPeak

May there be our blessing upon hallowed ground
Where young souls lay lonely without any sound
May these fallen soldiers hear prayers of love
Protected, kept safe by the wings of the dove.

Perhaps fields of flowers shall sprout where they bled
As nature’s memorials to honor the Dead
Perhaps every raindrop, and all the sun’s rays
Shall join with the mourners and sing songs of praise.

‘Tis graveyards and badlands where these souls depart
Yet even stronger are the graves of the heart.
Today, we remember the unknown, the famed
The elders, the youthful, the lost and unnamed.

We weep for the fallen with yet hopeful eyes
These soldiers, though passed, overhear grieving cries.
So, let these spirits be remembered, renowned
We pray for the blessing upon hallowed ground.

J.E.J. Moore Middle School Gifted Resource Teacher and one of the event organizers, Tonya Humphrey, shared examples of the life lessons students take away from this annual event.
"Our students came out and worked in the gardens this year," Humphrey said. "I did a presentation with the students because some of them didn't know the significance of these gardens. I came to their classes and talked to them about who Jesse was, why these gardens are important to us, and why it is important to remember our fallen."
She continued, "To see the kids come out and pull weeds, a chore they would've complained about at home, and be as happy as they could be because they were doing something to honor those in our military who made the ultimate sacrifice was special. Each team came out one-to-two times a week for 20 to 30 minutes to help keep the gardens looking amazing all year long. It was a lesson of, even a little thing like pulling some weeds can make a big difference and can honor the memory of those men and women who gave their lives."
This year's ceremony featured the playing of the national anthem by the J.E.J. Moore Middle School Royal Band, led by John Redling, and "In Flanders Fields," arranged by Roger Emerson and sung by the school's Full Year Choir, directed by David Dockan. In keeping with tradition, this year's event also saw a guest speaker in Dr. Lamont Edwards, a product of Prince George County Public Schools and a member of America's armed forces, who shared a message highlighting the importance of remembering those who are no longer with us. The Memorial Day Tribute culminated as students place American flags in the gardens as their classmates read the names of the nearly 50 service members who died in service to their nation since World War I. Aiding students in the ceremony was J.E.J. Moore Social Studies Teacher Rodney Leary. The former infantry special forces member-turned-educator of nearly 30 years delivered a poignant salute as "Taps" played over the hushed audience in attendance.
"Captain Ozbat and his widow were students of mine in my Government class their senior year at Prince George High School, so that is why this ceremony has even more importance to me because I knew Jesse," Leary shared. "My memory of him as a student was a kind person who would give you the shirt off his back. If you didn't have a pencil, one would mysteriously appear on your desk. He never tried to point to himself; he was just someone who people loved and trusted." He continued, "The reason I stayed in education is individuals like Jesse and the kids. We have done this ceremony for almost a decade, and every year, the kids are the ones who pull it off, and they make it happen."
The ceremony also featured a check presentation by Jamie Westbay, retired Prince George School Librarian, to Lisa Sharpe, Executive Director of the John Randolph Foundation of over $2,000 to help support the Honor Above All Scholarship. The fund was created in Ozbat's memory to support students looking to continue their education after high school.
Also, Ginger Absher of the Prince George Schools Food Service Organization presented a $150 donation from their organization to Captain Jesse Ozbat's scholarship.
To read more poems from J.E.J. Moore Middle School students for the Memorial Day Tribute, click the link below.